FBWRA Chairman Kate Salinger addressed the public enquiry held as part of the planning appeal against Barnet Council’s decision to refuse Comer Homes’ application for planning permission for the redevelopment of the North London Business Park, Oakleigh Road South with a scheme proposing up to 1350 homes in blocks up to 9 storeys high plus other development. 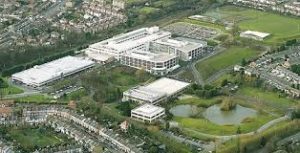 Kate almost missed the opportunity to attend the enquiry.

Barnet Council sent out notices about the enquiry, but this did not include one to FBWRA, even though we had lodged an objection to the application.

However, fortuitously ,the notices the Council did send out gave the wrong date for the enquiry, namely November 9th.  Barnet then produced retraction information with the correct date of October  9th on it.  Thus the main enquiry, which was run by the independent Planning Inspectorate,  based in Bristol, took place in October.

The planning inspector  whose job it was to run the enquiry then decided that, because of the confusion about the date,  there may well be people who had written November 9th in their diaries and decided to hold another session on that date so that everyone who wished to might be able to speak.

Fortunately Kate learned of this date and in her own words –

“I dutifully tottered off to Hendon Town Hall this morning,  armed with copies of the objections the FBWRA had made to Barnet’s Planning Dept regarding the Comer Homes Group application for NLBP.

Not vast numbers of people in the council chamber and sitting where the Mayor usually sits was a fairly grumpy planning inspector from Bristol who had absolutely NO sense of humour at all. [ Not a requirement for the job- Ed.]

Only 5 people spoke, including yours truly.

I began by laying into Barnet Council for not having informed us that the enquiry was happening. I thought that once an objection had been sent to Barnet objecting to an application they had to advise of any appeal. I also had a little moan about a Barnet officer to whom I had sent a very detailed letter asking about all manner of planning related matters to which I had not received a reply.

Then I listed the reasons I thought the planning application was flawed.

In no particular order, these were :-

– Over development of site;

– Not in keeping with character of local neighbourhood;

-If we wish to preserve and enhance certain localities in areas of Barnet, then we do not build a socking great housing development in the middle of them.

– No new shops, dentists, doctors, clinics, primary school planned for in the locality. Those currently existing are all over subscribed.

– Transport links are not brilliant.

– London Plan wishes to have many less cars on London’s streets by 2040. I doubt this will happen. The dwellers of the 1500 new flats and houses will probably all own at least one car and maybe two. No adequate parking provision in plans;

– Traffic in neighbourhood will necessarily increase on narrow and well used roads leading to congestion and air pollution;

I then suggested greed was the ruling force dictating the proposal and said that very few people  would  be likely to object to a much smaller plan for the site- a smaller plan that would NOT help create an overcrowded and lacking in infrastructure blot on the landscape.

I blush to tell you that I received applause when I had finished. Mr Grumpy then stated that such things had no part in a planning enquiry. I didn’t care. I had been given my moment of fame!”

This is our home